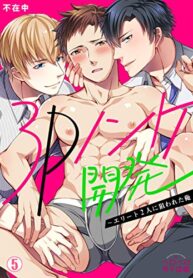 Keiichi Hachiya’s fiancee calls him “boring in bed” and dumps him. While he’s drowning his sorrows in alcohol, he signs up for a hardcore hookup site decides to meet the dominant Miyuki. However, Miyuki turns out to be Reiji Miyuki, who’s a guy! Keiichi is skeptical at first, but Reiji is a good listener, and his heart isn’t the only thing Keiichi opens up to him… He finds himself in bed with Reiji! He can’t believe he’s letting a guy he just met do these things to him… but it feels so good!! The next day, he discovers that Reiji works at the same company as him! He’s not sure how to react, but before he can decide, his friend begins taking advantage of him…! Two smart, handsome businessmen want Keiichi in this unbelievable romance story.

Teach Me About Love And Loosen Me Up