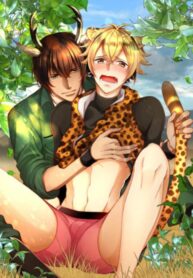 When the world became on the brink of collapse humans fused with animals & changed their forms & undergone evolution in order to survive ..Niel from cheetah clan boasts himself as the fastest ended up encountering Faust (pronghorn clan) while he was hunting a pronghorn ..Faust keeps up running away with the prey(pronghorn) he catches everytime .. Neil believed that he was the fastest loses to Faust & ended up offering himself ..& ended up getting devoured