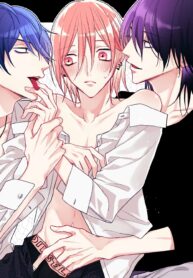 Mao Yasaka realizes that he may be gay when he finds himself falling in love at first sight with a photograph of a model named Kei. The only place where Mao can see Kei is the art exhibitions of the mysterious photographer named Mel.

One day, as he is entranced by Kei’s photo, someone at the exhibit asks to take photos of Mao. Who is it but Mel himself?! Before he realizes it, Mao is in bed with Mel, and is drowning in pleasure as Mel whispers to him “If you can be a good boy, I’ll let you meet Kei.”

Days later, Mao meets Kei, and it somehow turns into a situation where Mao is having sex with Kei as Mel takes pictures…?!

Despair 심연 / The Abyss [RAW] Trapped in the Dark