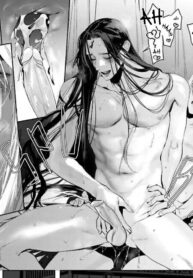 In this world, there are humans living on earth, greedy demons and hermits who protect people from evil.
Ishin, a half-breed of demon and human, has been obsessed with the hermit Koushun ever since he was picked up by him as a child. Now that he has grown into a respectable young man, he uses magic to force his body on Koushun, who is not at all amused. However, when he discovers that Koushun had a man in the past whom he tried to be with, even though it was forbidden to do so….