I Want You to Love Me to the Inside 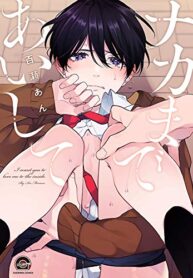 I can’t say it…. Something I’ve always wanted to do.
Yuzuriha who has a face prettier than other girls., actually hates people who judges others by their appearances. But his table mate, Tokiwa, is just that type of person.
One night, Yuzuriha and a stranger went to a hotel and ran into Tokiwa. And just like that, it let Tokiwa misunderstand that the veteran Yuzuriha is actually a first-timer!?

Yuzuriha has a feminine face that can beat most girls’ and he is fed up with people who only care about the other person’s looks.

Sitting next to him in class is Tokiwa, the very personification of the type of person he hates.

One night, Yuzuriha was about to enter a hotel with a man he had met on a dating app but unfortunately for him, he was seen by Tokiwa.

To make things worse, Tokiwa thought that Yuzuriha is used to doing it with men so, he

The Power of Alcohol is Amazing