I’m Being Pursued by a Hot Korean Actor! 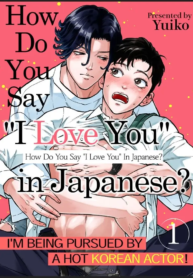 Kimochiii tte Nihongo de Nante Iu no? / How Do You Say "I Love You" in Japanese?! / キモチイイって日本語で何て言うの？～実力派俳優に迫られました～

Hiro is a big movie fan who works in the promotion department of a film distributor. Recently, he’s been hearing some nasty rumors about Jiheo Park, a handsome Korean actor who’s rising in popularity. When Jiheo visits Japan to promote his latest movie, Hiro ends up being the one he’s assigned to work with. Upon actually meeting Jiheo, Hiro’s disappointed that the Korean actor seems just as unfriendly as the rumors say. But later that evening when he’s working overtime, Hiro gets a surprise call from a local police station! Apparently, Jiheo’s luggage has been stolen! A tantalizing, mature, and purehearted BL story about overcoming language barriers using both physical and emotional means.

After Waiting for a Kiss

I Raised A Tiger Cub