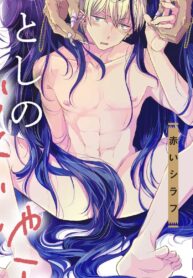 “To those who live in this world, ‘a walking total body of shame’.” What kind of world is ……!!!!!? Much, much more than others. Shinichiro Tsuji is a freelancer with a complex about his thin body hair. Today, again and again, he would look at his smooth arms and crotch in the bathtub at home and feel depressed, remembering the teasing of his friends. He would close his eyes and ponder over things as usual. Today, too, his daily routine was supposed to go by like that. When he looked up, he found himself in a foreign palace. When I looked up, I found myself in a foreign palace. I was mesmerized by the glossy hair fluttering in front of me. And in the blink of an eye, I became a prisoner. Among the people in the royal palace who never saw this, the only one who called out to Shinichiro and touched it was the youngest prince, Prince Falu. His body reacts to the hairy man who touches him as if he is probing him. His body reacts to the touch and ……? A brown beast prince and a sensitive boy with a big pie pan. A different world trip, touchy-feely love.

Perfect Sexual Assistant of Butler Who Detest the Master