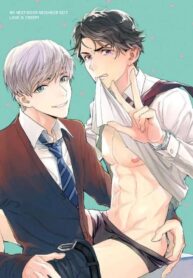 A younger, clingy but pure and innocent man and an older office worker with little self-control! Kazunari, an exhausted office worker, has started living with Kei, the younger neighbor he grew up next door to, after Kei’s house burns down. One night after seeing Kei leave the shower topless, Kazunari finds his heart racing over the smoking body Kei has, but stifles it immediately. Later, however, Kei slaps photo evidence of Kazunari’s hook-ups with other men in his face…! Kazunari faces one dilemma after another, including Kei coming onto him based on Kazunari’s wanton reputation, not to mention Kei being 11 years younger! Will Kazunari be able to maintain his pride under Kei’s pressure!? Includes a bonus manga from the paper version plus three bonus pages in the digital version