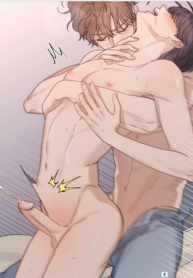 After presenting as a dominant alpha, Taegyeom accidentally triggers an omega’s heat. As a result, he avoids omegas and relies only on his childhood friend, Yoonwoo

In the midst of all this, Yoonwoo suddenly presented as an omega. After avoiding Taegyeom for five years, he accidentally meets Taegyeom at a bar in front of his school.

“Are we even friends?”

Thank You For The Meal, Virgin Cherry

I was possessed by your Ex-boyfriend