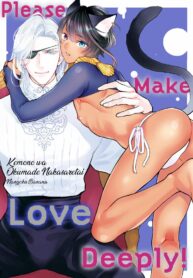 Azuki, a rare kitty half-beast, is sold off at an auction. He’s taken to a land far far away and finds that the only reason is to be eaten?! Azuki bolts and as he plans his escape, he bumps into the castle owner Kirito. The only way to survive now is to have sex with Kirito, but Kirito declares that he will never hold a rare species… As the days pass, Azuki starts to feel a tingling in his heart for the gentle Kirito. “What are these feelings?”. Why won’t Kirito touch him?
Kemono wa Okumade Aisaretai (Adapted From)

I’m Not Your Hero or Anything