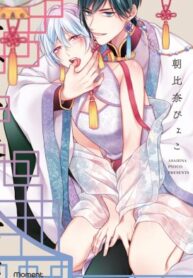 A ceremony joins two people from different classes in marriage. Ao is a lonely young man who grew up with wealth. Shion is a boy who grew up surrounded by a loving family. As children, Ao and Shion believed they could stay together despite their different backgrounds… but as they grew up into adults, Ao became the lord of the land, and they grew apart. As fate would have it, it turns out their ancestors were bound through a “binding ceremony,” and now it’s their turn. The ceremony is only for show?or at least that’s what Shion initially thinks. Even though he won’t admit it, his heart races on their first night as a wedded couple. And the ceremony won’t end until they consummate the marriage. Shion tries to resist, but in the end, he lets Ao have his way with him…!They come from different classes and backgrounds, but their love begins with a ceremony that started way back with their ancestors. Perhaps someday Shion will understand why Ao chose him.

May Belongs to Me