Tiger on the Prowl -For a Sensitive Hamster- 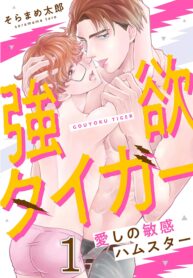 Kojirou was living a peaceful life as a convenience store worker after quitting his job at a black company. That is until one day when he found a wallet whose owner was actually a beast underneath his cool demeanour!

Kouga, the president of an IT enterprise, was very pushy about returning the favour to Kojirou but this actually caused Kojirou to shrink back instead. However, after spending time talking with Kouga, Kojirou found the latter easy to talk to and started opening up to him.

After seeing how Kojirou is the total opposite of him, and how unselfish and defenceless he is, Kouga found a feeling growing inside of him like none he ever felt before.

A Kiss for You, My Shinobi