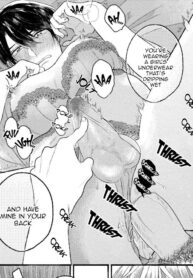 5 chs along w an extra! a manga w multiple stories. Mitani Chiharu only gets excited by men. He was letting out his stress by live streaming on the internet using the handle name “Tomo”. One day, Chiharu was approached by his classmate, Sakuma. “You’re Tomo, the one who live streams on an adult site.” Chiharu tried to deny it, but Sakuma striped his pants to check the right thigh for mole and Chiharu couldn’t keep it in and became erect. Getting confused from the sensation received from other persons hand, Chiharu is confessed to by Sakuma—

Free! Dj – When I Get Into The Dressing Room With My Childhood Friends by Kenashi Ai! (Mimisuke) [Eng]