I’m Not Selling My Virginity! 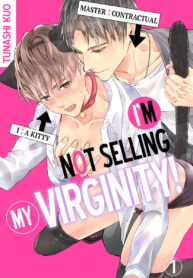 Except for sex, Ritsu will do anything for money. One night, his customer insists on having intercourse. As Ritsu runs away from him, he encounters Koh. The stranger’s smoking hot but has a somewhat forbidding look. Koh decides to rent Ritsu and takes him to a hotel room where he commands him to take off his clothes one by one. Sensing Koh’s heated eyes on him, Ritsu gets horny… which clearly shows from under his pants. Ritsu keeps saying to himself that it’s fine because it’s not real sex and continues. He only realizes his mistake as he feels Koh’s cock pressed against his lower parts. Will Koh make Ritsu break the no-sex rule!? What kind of relationship will develop between the rich but awkward Koh and Ritsu who’d do anything as long as he’s paid enough!?