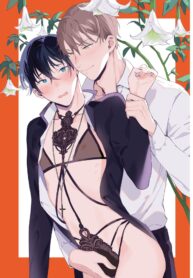 Eversince Sumino was 8 years he came across his mother designing women’s lingerie which open his eyes to a new world ..several years later he became a priest, but secretly wearing lingerie has become a fetish…His life was moving on until one day, his secret was found out by a talented craftsman ,Amashino, who came to repair stained glasses …. The secret was found and was shared sweetly…lets see how their relationship develops…well will wait for more chapters before scoring this

When I Quit Being a Corporate Slave