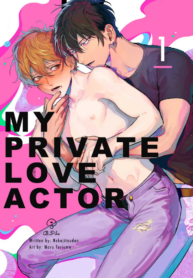 Tsukasa Hirayama works as a voice-over actor, primarily in anime. One day, his manager tells him he has signed Tsukasa up for a live-action movie, and he is to co-star with Kentaro Fujisawa, a handsome, popular actor. Tsukasa has admired Kentaro since he debuted as a child prodigy. His fantasies about being with Kentaro become a reality when the two were instructed to video chat to break the ice, ahead of the movie they’ll be filming together!! After confessing his adoration for Kentaro, Tsukasa is convinced he’s creeped him out. However, much to Tsukasa’s surprise, Kentaro is flattered and interested in getting to know Tsukasa more. A love story between two on-screen and off-screen actors.